When Will Cicadas Arrive In Maryland? 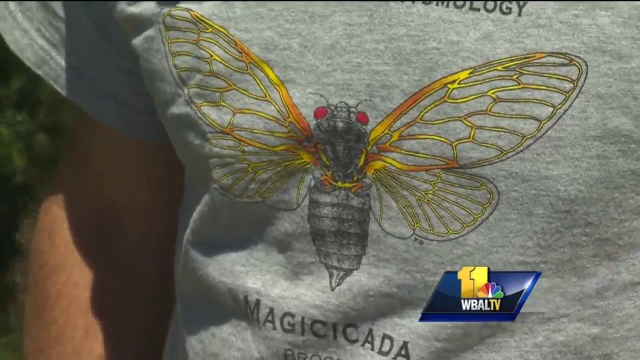 Appearance and life cycle of cicadas –

Adults vary in size and color according to species. All have prominent bulging eyes and semi-transparent wings held roof-like over their large bodies.

Adult dog-day cicadas are about one and one-half to two inches long with brown or green, black and white body markings. Adult periodical cicadas are slightly smaller, with black bodies, reddish-brown eyes, and orange wing veins. Their wings will have a black ‘W’ marking on the front wings.

A week after they emerge, the adult cicadas will mate and the females deposit eggs in groups on twigs near the end of branches of more than 200 kinds of trees. The eggs hatch in about six weeks. The young or nymphs drop to the ground where they burrow into the soil and feed on the sap of tree roots. Nymphs resemble wingless adults, are tan – brown with stout bodies, and have strong front legs that are specialized for digging and tunneling in the soil. They undergo four molts (growth spurts) while underground. For the periodical cicada, this will take 17 years. They will emerge in large numbers known as broods. Broods II, V, X, XIV, and XIX are found in Maryland. Brood X will emerge in Maryland in 2021. Brood II emerged in 2013 and will emerge again in 2030. It is not uncommon to have a few periodical cicadas emerge a year ahead or behind the rest of the Brood. During the spring mature cicada nymphs will tunnel to the soil surface and emerge. They crawl onto tree trunks, posts, and other upright structures and after a short period molt or shed their skin to become winged adults. The empty skins are left clinging to objects.

What day will the cicadas come out?

When are they expected to arrive? –

The time frame for 2021 arrival is weather dependent – when ground temperatures reach 64 degrees. The periodical cicadas are predicted to begin the first or second week of May and will be gone by the end of June. (Annual cicadas will be out in June – August.)